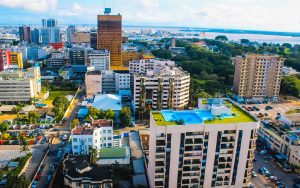 Abidjan is divided into two halves (northern Abidjan and southern Abidjan), each having 10 official boroughs, or communes, led by a mayor.

BY PLAIN Abidjan is well-connected on a global scale, with daily flights on: Turkish Airlines from IstanbulAir France from ParisBrussels Airlines from BrusselsEmirates  from Dubai (via Accra, no change of aircraft)Air Nigeria (formerly Virgin Nigeria) from LagosKenya Airways  from Nairobi (also continues to Dakar on the same aircraft)Ethiopian Airlines  from Addis AbabaAir Ivoire is a...

Because Abidjan is extremely spread out, walking might take a long time, and riding a bicycle is not the safest option (except nearer the water in Zone Quatre.) However, there are several ways to travel around by car. BY BUS There are various bus lines that run across the city. They are...

Overall, Abidjan's nightlife is regarded as one of the most vibrant in all of Africa. The neighborhood is densely packed with nightclubs, maquis, outdoor places, and go-go bars. These entertainment outlets offer a musical 'pipeline' that mostly includes DJs, Coupé Décalé, and Zouglou, as well as, to a lesser extent,...

Fashion Every year, the city hosts many fashion events, including "Les Féeries" (The Fairies), the Miss Côte d'Ivoire, Miss Abidjan District, Miss Christmas (for 6–11 year olds), and Miss Awoulaba pageants (very prestigious). Every year, the Yéhé Fashion Show, a celebration of African fashion, is held, as is the International...