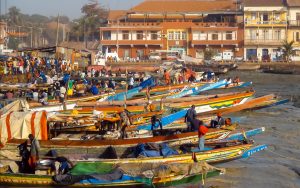 Guinea-BissauBissauHow To Get Around In Bissau
December 4, 2021

Shared cabs are inexpensive and common. Stop cabs and tell them where you want to go (or indicate to passing taxis), and they will either accept “na bai” (I’m going) or refuse “no” (no) if individuals already in the vehicle are headed somewhere else in the city. Prices are more or less set, and you’re unlikely to get ripped off, unless you’re a visible foreigner taking a cab from the airport or Hotel Bissau Palace.

There are also minibuses called “toca-tocas” that run on defined routes; the journey costs 100 FCFA per person, although the vehicles are often overcrowded!

Presidential Palace (Palácio Presidencial). During the civil war, it was bombed out. Rebuilt in 2013 with Chinese funds, it now serves as the president's seat.Bissau Velho - the historic Portuguese colonial center There isn't much life there anymore, but it's still a pleasant location to wander around. Don't overlook the jail with...

The French Cultural Center at the Bayana roundabout often hosts concerts, movies, dancing lessons, French courses, and other events, which are listed on their website.The Portuguese Cultural Center (adjacent to the Portuguese embassy, behind "Benfica") also offers performances, but in a less appealing setting.Swim at Palace Hotel (5000 FCFA),...

Every night from 20.00-7500 FCFA, Recidencial Coimbra serves an excellent buffet that includes appetizers, main meals, desserts, wine, and water.Palace Hotel. Quite perhaps the greatest restaurant in town. There is a swimming pool for non-guests to use for 5000 FCFA (eat lunch in the pool) and wireless internet.Hotel Malaika. There is...

Wood carvings - Try the Centro Artistico Juvenil, adjacent to "Chapa de Bissau," which has regulated pricing and no need to negotiate - or the market in front of Penso Central, which requires bargaining.Hand woven textiles - NGO [email protected] in Quinhamel - or at the Bandim Market - has a good...