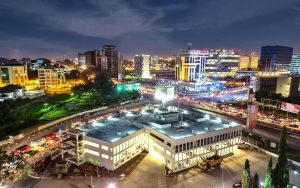 AfricaGhanaHow To Travel To Ghana

With four flights each week, Delta Air Lines connects Accra with New York City (JFK) and Atlanta. From London Heathrow, British Airways (daily) and Virgin Atlantic (five times weekly) fly. KLM operates daily flights from Amsterdam’s Schiphol Airport. Daily direct flights from Frankfurt and Milan are operated by Lufthansa and Alitalia, respectively, with a brief stop in Lagos, Nigeria. Emirates and Middle East Airlines both fly nonstop daily from Dubai in the Middle East (with connections to Asia and the Far East). Ethiopian Airlines operates four nonstop flights each week from Addis Ababa (with stopover, you can visit another African country). Egypt Air also flies nonstop from Cairo to Accra. South African Airways flies nonstop from Johannesburg four times a week. The shortest flight from Brazil or close is Angola Airlines’ trip from Rio de Janeiro to Luanda, Angola. You may fly nonstop to Accra from there. Turkish Airlines has been flying nonstop from Istanbul to Accra four times a week since January 2012.

Royal Air Maroc also flies to Accra several times a week from Casablanca. Nigeria is served by Arik Air and Air Nigeria. Outside of Africa, the cheapest flights to Ghana are typically from London, but it doesn’t imply British Airways is the cheapest (i.e. a transfer inside continental Europe may be required). Brussels Airlines, which operates two weekly flights from Brussels, will cease operations on March 25, 2012. TAP, a Portuguese airline, travels to Accra four times a week and will shortly add another route. North Americans may be able to save money by purchasing a cheap ticket to London from their own nation. (Be aware that London has two international airports, Gatwick and Heathrow, and leave plenty of time for connections.) Local airlines such as Starbow, Antrak, Fly 540, Citylink, and African World Airlines operate inside the nation and sometimes to neighboring countries in the subregion. Kumasi, Takoradi, Sunyani, Tamale, which is about to be converted into an international airport, and Obuasi, which was recently built by Anglogold Ashanti, all have regional or domestic airports. Photographs of the tiny but well-run airport.

The border crossing between Togo and Aflao is a fun sight to see. It seems to be extremely disorganized, and human traffic appears to be flowing freely. A white individual, on the other hand, is unlikely to be able to get through without going through all of the procedures. Although some ladies may get marriage offers, the border guards are competent enough that you will not be solicited for bribes. A visa to Ghana may be purchased at the border for GHS110, which is twice the usual price (due to the expedited delivery). Togo’s 7-day transit visa is a bargain for XOF5,000 (2011). If you need to purchase a visa, change your money before crossing. Change your money at a bank in Aflao or Lomé (best to do it ahead of time at a ForEx in Accra).

Keep your cameras hidden in your packs while crossing the border; both Ghanaian and Togolese border guards will confiscate your camera if they see you taking a picture, or at the at least give you a nice chiding.

Although crossing the border with Cote d’Ivoire at Elubo takes less time, Ivorian border guards seem to be considerably more strict with the regulations.

The primary method for visitors arriving from Burkina Faso is a bus from Ouagadougou to Bolgatonga/Tamale/Accra. Alternatively, you may go to Hamile and cross the border (or Hamale, as it is called on the BF-side of the border). From Bobo-Dioulasso, take the bus. You must cross the border on foot (you must walk 300 meters across no-man’s-land after leaving Burkina Faso to reach Ghana customs). Locals will be lingering and seeking to change money at affordable rates). Then, to Wa, catch a Metro Mass bus (alternatively hop on a tro-tro and do the trip in stages). Make careful to catch an early bus from Bobo; if the bus is late, you may have to spend the night in Hamile. The custom officials may direct you to a location where you can obtain a room (GHS10).

To Ghana, there are no authorized boat services. On the Volta lake, however, there are pantos and boats that connect the eastern part to the Volta region and other places.