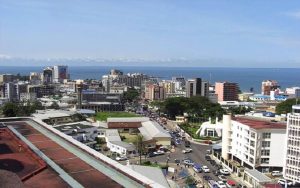 Pygmy peoples were the first to settle in the region. As they moved, Bantu tribes mainly supplanted and assimilated them.

The first Europeans came in the 15th century. In Gabon, a Myeni-speaking monarchy known as Orungu emerged in the 18th century.

Bartholomew Roberts, a Welsh pirate known as Black Bart, perished at sea off the coast of Cape Lopez on February 10, 1722. From 1719 through 1722, he attacked ships along the coasts of the Americas and West Africa.

In 1875, the first expedition to the Gabon-Congo region was conducted by French adventurer Pierre Savorgnan de Brazza. He established Franceville and subsequently served as colonial governor. When France formally conquered Gabon in 1885, many Bantu tribes resided in the region that is today Gabon.

Gabon joined the four regions of French Equatorial Africa in 1910, forming a federation that lasted until 1959. On August 17, 1960, these regions gained independence. Léon M’ba was Gabon’s first president, elected in 1961, alongside Omar Bongo Ondimba as his vice president.

Following M’ba’s rise to power, the press was repressed, political rallies were outlawed, freedom of speech was restricted, other political parties were progressively pushed out of power, and the Constitution was modified following French lines to vest power in the Presidency, which M’ba took. When M’ba dissolved the National Assembly to establish one-party rule in January 1964, an army coup attempted to depose him and restore parliamentary democracy. Within 24 hours, French paratroopers arrived to restore M’ba to power.

Despite massive demonstrations and rioting, the coup ended after a few days of combat and the opposition was imprisoned. To this day, French troops are stationed at the Camp de Gaulle on the outskirts of Gabon’s city. Bongo took over as president when M’Ba died in 1967.

Bongo proclaimed Gabon a one-party state in March 1968, dissolving the BDG and founding the Parti Democratique Gabonais (PDG). He welcomed all Gabonese to join, regardless of their past political allegiance. Bongo used the PDG as a vehicle to drown the regional and tribal conflicts that had previously split Gabonese politics in order to create a unified national movement in favor of the government’s development goals. In February 1975, Bongo was elected President; in April 1975, the vice presidency was abolished and replaced with the prime ministership, which had no automatic succession rights. Bongo was re-elected to 7-year terms as President in December 1979 and November 1986.

Students and workers staged violent protests and strikes in the early 1990s, fueled by economic dissatisfaction and a desire for political reform. Bongo worked with employees on a sector-by-sector basis in response to their complaints, making substantial pay reductions. He also said that he would open the PDG and hold a national political conference in March–April 1990 to debate Gabon’s future political structure. The meeting was attended by the PDG and 74 political groups. The governing PDG and its supporters were split into two loose coalitions, the United Front of Opposition Associations and Parties, which included the breakaway Morena Fundamental and the Gabonese Progress Party.

The April 1990 conference endorsed significant political changes, including the establishment of a national Senate, decentralization of the budgeting process, freedom of assembly and press, and the elimination of the need for a departure visa. Bongo resigned as PDG chairman in an effort to lead the political system’s transition to multiparty democracy, and a transitional administration led by a new Prime Minister, Casimir Oye-Mba, was formed. The resultant administration, known as the Gabonese Social Democratic Grouping (RSDG), was smaller than the previous one and featured members of various opposition groups in its cabinet. In May 1990, the RSDG produced a temporary constitution that included a basic bill of rights and an independent judiciary, but gave the president broad administrative powers. This document went into effect in March 1991 after additional examination by a constitutional committee and the National Assembly.

However, opposition to the PDG persisted after the April 1990 meeting, and two coup attempts were discovered and foiled in September 1990. Despite anti-government protests after the unexpected death of an opposition leader, the PDG won a strong majority in the first multiparty National Assembly elections in almost 30 years in September–October 1990.

Following President Omar Bongo’s re-election with 51% of the vote in December 1993, opposition candidates refused to accept the results. Following serious civil unrest, the government and opposition groups agreed to work toward a political solution. These discussions resulted in the Paris Accords, which were signed in November 1994 and included many opposition leaders in a government of national unity. However, this arrangement quickly fell apart, and the 1996 and 1997 parliamentary and municipal elections set the stage for a return to partisan politics. The PDG scored a resounding win in the parliamentary election, but opposition mayors were elected in many large cities, including Libreville, at the 1997 municipal election.

In December 1998, President Omar Bongo cruised to re-election with huge majorities of the vote, despite a split opposition. Despite numerous alleged anomalies, several foreign observers described the results as representational, and there were none of the violent unrest that preceded the 1993 election. The PDG and associated independents controlled the National Assembly almost entirely after peaceful but faulty parliamentary elections in 2001–2002, which were boycotted by a number of minor opposition parties and severely condemned for administrative flaws. President Omar Bongo was re-elected in November 2005 for a sixth term. He was comfortably re-elected, although opponents allege that the election was plagued by irregularities. Following the announcement of his victory, there were a few incidents of violence, but Gabon remained calm overall.

President Omar Bongo died of heart arrest on June 8, 2009, in a Spanish hospital in Barcelona, signaling the start of a new era in Gabonese politics. Rose Francine Rogombé, President of the Senate, was appointed Interim President on June 10, 2009, in line with the revised constitution. On August 30, 2009, the first competitive elections in Gabon’s history without Omar Bongo as a candidate were conducted, with 18 candidates for president. There were a few minor demonstrations in the run-up to the elections, but no major disruptions. After a three-week review by the Constitutional Court, Omar Bongo’s son, governing party head Ali Bongo Ondimba, was officially proclaimed the winner; his inauguration took place on October 16, 2009.

Many opposition candidates claimed election fraud, and the first release of election results sparked unusually violent demonstrations in Port-Gentil, the country’s second-largest city and a long-time stronghold of resistance to PDG administration. Port-Gentil residents rushed to the streets, torching a number of businesses and homes, including the French Consulate and a local jail. Only four people were killed in the riots, according to official figures, but opposition and local leaders say there were many more. To assist the struggling police, gendarmes and the military were sent to Port-Gentil, and a curfew was imposed for more than three months.

In June 2010, a partial legislative by-election was conducted. For the first time, a newly formed coalition of parties, the Union Nationale (UN), took part. PDG defectors who quit the party following Omar Bongo’s death make up the majority of the UN. The PDG won three of the five fiercely fought seats, while the UN gained two; both parties claimed victory.

Gabon is a nation rich in folklore and mythology, with an oral culture that predates the advent of literacy in the twenty-first century. "Raconteurs" are presently trying to preserve Fang and Nzebis customs like as the mvett and the ingwala. Gabon is also home to globally renowned masks like the...