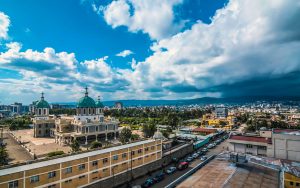 Bole International Airport, the busiest in East Africa and the hub of Ethiopian Airlines, is served by several international airlines with daily flights to Europe, the United States, Asia, and many African cities such as Accra, Bamako, Brazzaville, Cairo, Dakar, Dar es Salaam, Djibouti, Khartoum, Harare, Johannesburg, and Nairobi. There are two terminals available. T1 (the older, smaller terminal) is used for all domestic flights and the majority of international flights (but not Kenya). T2 (the newer 2003 building) is for any other foreign flights — arrangements are subject to change, so please double-check beforehand.

Access to the terminals is prohibited as of July 2012. Anyone waiting to meet you at the airport, as well as taxis, will be in the parking lot. A dozen of the most prestigious hotels still maintain a booth within the arrivals area. Similar laws apply at the country’s other airports, for both arrivals and departures. A cab to the city costs 100-150 birr as of July 2011. Many hotels will send a car to pick up pre-booked guests from the airport if you make a previous agreement. The Sheraton Addis, Dreamliner, Hilton Addis, and the majority of other hotels provide frequent shuttle service to its clients. This is also true of many well-known guesthouses.

The majority of important roadways are in decent shape.