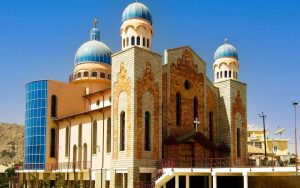 AfricaEritreaThings To See in Eritrea

In terms of cleanliness, serenity, and architectural style, Asmara is now at the top of the globe. Art Deco public buildings, villas, and mansions are what distinguish it and make it so beautiful (or Decorative Art). They were constructed in a variety of architectural styles, including Art Deco, Futuristic, and Rationalist. The buildings’ architectural designs are extremely distinctive, and the facades, in particular, are eye-catching. They are magnificent, and some of them resemble sailing ships and historical buildings.

Others seem to be unusual falls from other planets (or supernatural things), while others appear to be magnificent paintings by a genius artist. Anyone may appreciate the beauty of the city’s architecture by walking to the Coptic Orthodox Church, the Cathedral, the Mosque, the theaters, and other places in the center of the city. The magnificent landscape of Asmara’s structures, accentuated by umbrella-like palm palms, invites appreciation and provides joy to view and admire.

Asmara is a great location to admire and satisfy your yearning for Art Deco from the early twentieth century. As a result, international tourists have been known to remark that Asmara residents live in a museum. Asmara is therefore a museum in the open air. Asmara and its Art Deco were constructed in the first four decades of the twentieth century with the help of a large indigenous labor force and a few Italian builders and engineers. The majority of Art Deco structures are concentrated in a few locations across the globe. They remain complete, maintained, and ancient in Asmara (as the adage goes, ‘Old is Gold’), while they were destroyed in Europe and other locations either by the two Great Wars or by subsequent modernization waves, or both.