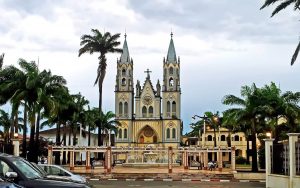 Taking photographs of government assets without authorization is severely forbidden. Photographing airports, government buildings, or anything of military or strategic significance is prohibited. Foreigners snapping pictures of locals, especially children, is usually frowned upon. Since a general rule, bringing a camera with you when strolling about town is not a good idea, as it may get you into serious problems with the cops. In the past, taking photos in public required a permission from the Ministry of Information and Tourism. Despite the fact that this restriction has been removed, officers may unintentionally penalize or even arrest anyone who are attempting to snap pictures.

Equatorial Guinea’s climate is tropical, and it is usually extremely hot. Lightweight clothes is recommended. Because of mosquito concerns, avoid wearing dark colors.

Equatorial Guinea, while having ample resources and the greatest economic growth rate in Africa, does not offer legal stability to international workers.

Because the country was a Spanish province until 1968 (the country’s short-lived democracy was paradoxically permitted by the Francoist regime), the locals are very hospitable and have a certain familiarity with everything related to Spain, with the last century marking the beginning of the presence of settlers in the island and coastal areas where they had a large number of plantations. Furthermore, from 1966 and the 1990s, half of the country’s inhabitants moved to Spain.

Some sites need specific permissions and must be visited with a guide. Consult the Ministry of Foreign Affairs’ website.

A guided trip is advised to avoid uncomfortable circumstances with military checks on the highways, particularly on the island of Bioko, where the presence of Westerners is apparent and therefore the danger is high.

Food/Water: Equatorial Guinea has no ‘potable’ or pure water sources. Only bottled water should be consumed by travelers. Consume with caution any washed fruits or vegetables, as well as beverages containing ice cubes or ‘water’ additions, such as coffee, tea, or lemonade.

Wear Shoes: Although the beaches in Malabo and Bata are lovely, it is always a good idea to wear shoes owing to abandoned garbage and dangerous sand bugs. This is also true while walking on carpeted surfaces.

Malaria medicine: Malaria is the country’s top cause of mortality. It is recommended that tourists get medical advice before taking malaria medication. The most prevalent type of malaria in E.G. is Plasmodium falciparum, which is resistant to the antimalarial medication chloroquine.

The La Paz Hospitals in Bata and Malabo, according to the US embassy, are the only two in the nation that satisfy the medical requirements of a developed country’s hospital.

By plane There are two paved airports, one near Malabo (SSG) and the other in Bata (BAT) (BSG). Ecuato Guineana de Aviación, the country's primary airline, conducts domestic and international flights from Malabo International Airport. Other airlines that operate to Malabo airport include Iberia (from Madrid), JetAir (from London Gatwick),...

The First Hispanic-African Cultural Congress was held in June 1984 to examine Equatorial Guinea's cultural identity. The congress served as a focal point for integration and the blending of Hispanic and African cultures. Tourism Equatorial Guinea presently has no UNESCO World Heritage Sites or World Heritage List candidates. UNESCO's Memory of...