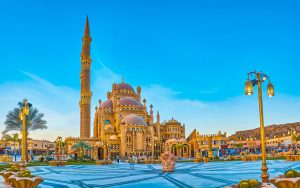 The city’s entertainment and eating scene is concentrated around the Na’ama Bay area, which contains the majority of Sharm’s clubs, cafés, restaurants, and boutiques. Na’ama Bay is located around halfway between Sharm Airport and the Old City, about a ten-minute drive from either. While microbuses are available from downtown, you will need to hire a taxi to reach Na’ama Bay from the airport.

Sharm el Sheikh has developed into three separate sections; Nabq is a new suburb north of Na’ama, Old Market is to the south of Na’ama Bay, and Hadaba is to the west.

January FestivalsCoptic Christmas is a religious celebration that takes place around the beginning of January. During the festival, there will be colorful parades, music concerts, and theatrical performances centered on religious themes. The Islamic New Year, which falls in January, commemorates Mohammed's journey from Mecca to Medina.February FestivalsUnion Day...