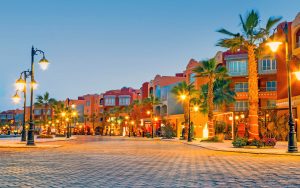 EgyptHurghadaHow To Travel To Hurghada

Hurghada is accessible through major airports in Europe and the Middle East. Prices vary depending on when you book and the airline. Most major European and Middle Eastern airlines may fly you directly to Hurghada International Airport without stopping in Cairo.

If you are in Cairo, you may also travel to Hurghada on Egypt Air Express, the country’s official airline and a subsidiary of Egypt Air, which is currently serving internal destinations throughout Egypt. Prices range from 400 to 900 Egyptian pounds depending on the season and how far in advance you order your tickets.

Egypt Air offers flights from Sharm el-Sheikh for about 450-550 LE (the trip takes about 1 hour).

Due to a lack of visitors, ferry services between Hurghada and Sharm el-Sheikh in the Sinai Peninsula were halted in 2012.

Hurghada is accessible by bus from Cairo. Depending on the operator, the journey normally takes around 7 hours. The Super Jet (ph. 16108) and Go Bus are two well-known operators (ph. 19567). There are many stations, one of which is located below Cairo Railway Station Ahmed Helmy. There are several pricing choices ranging from 50LE to 150LE, and there are buses to Hurghada available every hour (avoid MCV Co). Medan El Giza station in northwestern Cairo is often overcrowded, as is Almaza Station in the Heliopolis region in northeastern Cairo. Bus timetables vary often, but if you go to the bus terminal without making a reservation, you’ll find plenty of possibilities.

Luxor is around 4-5 hours by bus, and your tour operator must depart and return at certain times in order to travel in a police-escorted convoy (there are approximately 150 other tour buses). The “Upper Egypt Bus” service connects Hurghada, Safagah, Luxor, and Aswan.

Aswan. Upper Egypt has just one transport company to the Red Sea. The buses are modern, the ticket is 50LE (maybe you pay an additional 5LE as a foreigner), there are two bus movements, the first at 15:30 and the second at 17:30, remember the journey takes 8 hours or more, and you’ll arrive in Hurghada after midnight.

BY PUBLIC TRANSPORT Hurghada has no regular public transportation. Routes for white minivans (Toyota Hiace) known as micro buses have been developed. Locals are the primary users, yet they are simple to utilize. It costs roughly 1-2 Egyptian pounds, and they stop and go anywhere you like, with the exception...