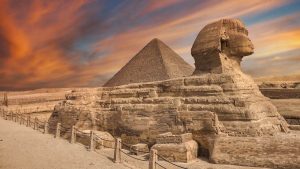 AfricaEgyptHow to get in Egypt
January 16, 2021

Ferries regularly connect Aqaba to Nuweiba on the Sinai Peninsula, bypassing Israel and the sometimes complicated border regulations. There is generally no visa fee to enter Jordan via Aqaba, as it is part of the free trade area. The route to Nuweiba has been operated by AB Maritime. It is also possible to travel from Saudi Arabia to several ports on the Red Sea coast.

There is also a weekly ferry from Wadi Halfa in Sudan to Aswan.

There used to be a ferry service from Venice to Alexandria via Tartus in Syria, operated by Visemar Lines. However, due to the political situation in Syria, the ferry has been discontinued and there are no longer passenger ferries between Europe and Egypt. For those who want to travel by ferry, the only option is to travel by cargo ship.

A coach trip to Egypt is a cheaper option than a short flight from neighbouring countries. A trip between Jordan and Cairo can cost as little as 45 US dollars (35 euros). The disadvantage, of course, is that it takes time, and even though today’s buses have plush seats and air conditioning, it’s quite uncomfortable, as you’re tied to a seat for 40 hours. In addition, foreigners entering Egypt by bus have to pay a tax of 63 EGP.

Israel is the most popular country for bus travel, and travellers can easily reach Egypt by bus from Jerusalem and Tel Aviv. However, there are no cross-border connections. The most common route is to take a bus to Eilat, where you can cross the border at Taba and take a bus to Cairo or Sinai. There are usually only two or three buses a day from Taba to the different destinations; one service in the morning and one in the afternoon, with occasional departures in the early evening.

Plan your arrival in Eilat accordingly and be prepared to spend the night in Eilat or Taba if you arrive late. As usual, entering Israel by bus means getting your passport stamped, and many Arab countries will refuse you entry.

Other routes to Cairo are operated by Jordanian bus companies (JETT), which run direct flights from Amman twice a week.

SAPTCO provides daily connections from Dammam, Jeddah and Riyadh in Saudi Arabia. There are also buses from Benghazi, but these could be suspended due to the unclear security situation in that city. Travel time for all these destinations varies from 25 to 40 hours.

Petrol is fairly cheap in Egypt, prices are heavily subsidised and have recently fallen to less than 1.25 USD/US gallon. If you decide to rent a car, petrol won’t add much to the cost. Car rental companies have a minimum age requirement of 21 years.Driving in Egypt is very different from driving in a Western country and is not for the faint of heart.

If you don’t really need this option, it is just as easy and probably cheaper to take a taxi and explore the country by plane, train and/or bus. As you will see shortly after your arrival, there is little respect for traffic regulations and there are very few signs indicating traffic rules. You could also become the target of the Egyptian police, who will look for a bribe and choose an insignificant offence that you have committed and that you could not have avoided and stayed on the road.