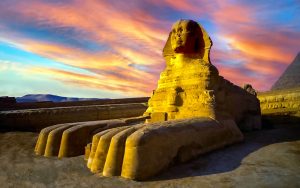 All of Giza’s noteworthy attractions are focused on the Giza Plateau, which is located at the end of Pyramids Road. Some people are taken aback when they go along a street in Giza and witness the top of a Pyramid rise over the golden arches of a McDonald’s with an Arabic sign – your perception of pyramids rising from an empty desert may differ from reality.

There are two ticket offices: one is located at the main entrance, while the other is located near the Sphinx on the Plateau’s eastern section. If you take the second one in the morning, you’ll miss the throng and have the opportunity to visit the Sphinx region in peace and quiet. The site entrance fee is LE 60, and admission to the pyramids costs an additional LE 30 for the Pyramid of Menkaure and LE 100 for the Great Pyramid of Khufu. Student IDs will come in useful, since they will entitle you to a 50% discount. The inside of the pyramids is hot, humid, and somewhat claustrophobic, with steep, dusty passageways that are difficult to navigate, and individuals with heart or lung problems or a physical disability should avoid it. At any one moment, only two pyramids are exposed to the public, while the third is being rebuilt, and they alternate every two years. However, for those prepared to withstand these circumstances, it may be an informative and intriguing experience. Seeing the inside walls and passageways of the pyramids firsthand heightens one’s admiration for the enormous feat of the architects of these ancient buildings. Cameras are not permitted within the pyramids. For those on a budget, visiting the Pyramid of Menkaure provides an experience comparable to that of the greater pyramid at a fraction of the cost.

Not all of the Pyramids are equally accessible for internal research, since the Egyptian Supreme Council of Antiquities closes them to the public for conservation and repair purposes at least one at a time.

Although climbing the Pyramids was once a popular tourist pastime, it is now both legally prohibited and exceedingly hazardous – numerous travelers have perished in the effort. While some guards have been known to turn a blind eye in exchange for baksheesh in less-frequented places, this practice has a detrimental effect on the pyramids and is severely prohibited. However, trespassing into the Giza complex at night is rather straightforward, and Khufu’s Great Pyramid may be ascended relatively quickly from the south-western corner. This, however, is still hazardous and unlawful.

It’s prudent to come to the Pyramids immediately upon its opening, since tour bus activity and (in the summer) the heat rapidly overwhelm the sights, making them impossible to experience properly.

Outside of the gate checks, do not offer your ticket to anybody. You must present it to pass through the metal detectors at the entrances to the Pyramids and Sphinx areas, as well as to access the Pyramid if you purchase that ticket. Numerous individuals will approach you and claim (true or falsely?) to work for the government, then want to see/grab the ticket/grab it, then take it and attempt to start the tour for you. Do not believe that they are legitimate just because they are doing this in front of the cops. They want to quickly explain things and then want a gratuity. Refuse to surrender your ticket and do not be scared to stand up for yourself and decline tipping. If you wish to take a tour, the better ones may be booked in advance and will provide you with more precise information on what you are viewing. (One of their favorite hiding places is beside the tombs outside the Great Pyramid.)

The Giza Plateau for Kids

The Giza Plateau has more to offer children than any other place on Earth. As you approach the ancient marvels, they take your breath away.

The Pyramids of Giza for Kids

The Giza pyramids are kind of pricey to see. Each pyramid has its own ticket. The office clerk will inform you that the area ticket is acceptable, but it is not. The area ticket provides access to the Sphinx and the region around the pyramids. Each pyramid requires a separate ticket. The Great Pyramid of Khufu and Khafre’s Pyramid are the only pyramids worth seeing.

Simply for curiosity’s sake, the Great Pyramid of Khufu is worth viewing. After seeing the big pyramid’s outside, it’s natural to desire to examine the inside. One thing is certain about that pyramid: it provides excellent workout. It’s really worth seeing since all of the hieroglyphics remain intact, and unless you’re an expert at deciphering hieroglyphics, it’s a fantastic mystery. Even if you are unable to understand it, you will enjoy the elaborately carved figures.

Khafre’s pyramid is the kind of pyramid that the majority of people are familiar with today. The Great Pyramid of Khufu’s pyramid architecture is characterized by the proximity of the tomb to the pyramid’s summit. Khafre’s sarcophagus is located underground. To visit his grave, you must really descend under the pyramid. Although his corpse is missing from both pyramids.

Minakure’s pyramid is not very interesting to see. However, if you’re on a budget, this is the greatest option. The admission fee to the pyramid is 30 Egyptian pounds, or about $6 USD. The pyramid resembles a miniature replica of Khufu’s Great Pyramid.

Bear in mind that seeing the pyramids will take the whole day.

The Egyptian Museum for Kids

The Egyptian Museum has a great deal to offer children. The Mummy Room is the most intriguing. The Mummy Room admission fee is 100 Egyptian Pounds. However, after all, it is unquestionably worth it. The mummy chamber has around 15 distinct mummies. One feature of the mummies is their little stature.

The Sound and Light Show for Kids

The pyramid sound and light display is one of the most engaging activities for children in the area. You may see the pyramids in the dark or in quiet prior to the show’s start. Normally, the cacophony of visitors and sellers is constant. The tale of music and light is similar to that of a book. The Sphinx serves as both the background and storyteller of a lengthy narrative. The sceneries are projected onto the pyramids, and the various pyramids are illuminated.

The Giza Pyramids, Egypt's largest tourist attraction, draw millions of visitors each year. They also draw a significant number of the most determined opportunists from a long distance away. Report any harassment by camel drivers or tourist touts to the black-uniformed (or white-uniformed in the summer) Tourist Police immediately,...