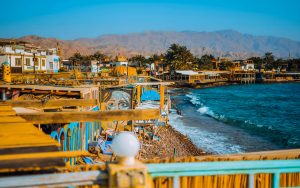 Dahab is one of Egypt’s most multi-cultural towns, integrating different religious traditions in a peaceful way; as a consequence, the list of Dahab Holidays contains several prominent African festivals as well as some unique, indigenous festivals. Few people realize that, in addition to the original Bedouin culture, Dahab is home to a tiny number of Christians. Furthermore, since the historical significance of certain of the festivals is not widely recognized, they are celebrated by a minority, i.e. tiny tribes.

Wafaa Al Nil, which takes place in September, is also known as the ‘Festival of the Nile.’ This event, which is one of the oldest in Egypt, is celebrated in a variety of ways around the country. It is commemorated in Dahab with a focus on social connection via different activities. During this time, visitors may engage in night-long poetry sessions or lectures. This is a simple approach to comprehend the growth of Egyptian civilization. Another event with a similar concept, the Leylet en Nuktah, is held in the second week of June. This holiday, like many others, has historical importance and has been celebrated since the time of the pharaohs. Each year, the precise date for the Leylet is computed using the Coptic calendar, a traditional lunar calendar.

With approximately 90% of its inhabitants adhering to a strict interpretation of Islam, Ramadan is undoubtedly the most important of Dahab’s festivities. This festival commemorates a key milestone in the history of Islam: the revelation of the Holy Quran to Prophet Mohammed. This event lasts almost a month, with day-long fasting followed by nighttime feasting on sweet treats. Local gatherings known as ‘Iftars’ are held throughout Dahab, creating an unrivaled bustle in the local marketplaces.

This celebration attempts to bring people of different religions together. The festival of Sham al-Naseem is more of a picnic-style celebration of the arrival of spring. The holiday is observed in the later part of March with relatives going on spontaneous picnics and inviting distant family members. Kidney beans and dried fish are popular local foods around this time.

This is one of Dahab’s lesser-known events. The Orthodox Church is the faith of Egypt’s Christian minority. Christmas is celebrated on January 7th, rather than December 25th, in this country. This version of Christmas also involves fasting for extended periods of time due to certain unique rituals that are exclusive to North African towns such as Dahab. The occasion does not elicit large-scale festivities, but visitors may witness the traditional Christmas trees and excitement at the local marketplaces.

Dahab is divided into three separate sections.Masbat Bay is in the center, approximately equally split by a floodway (the funny bridge over dry sand - except during a rare but impressive flash flood). Masbat's tourism area extends north to Eel Garden (or Meleil as the Bedouin name it) and...