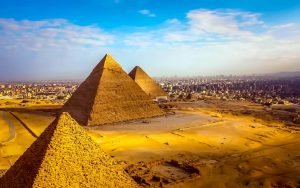 Citystars is Egypt’s top retail mall and is on par with an international mall. It carries the majority of foreign brands as well as the majority of international culinary chains. It has a cinema and an amusement park. Mall of Arabia is a brand new, huge retail mall in the 6 October City suburbs. It is Cairo’s second most popular shopping location, with many of the same American and European brands as Citystars.

ATMs may be found in a variety of locations across downtown. ATMs at five-star hotels are a more secure choice. There are also various currency exchange offices, or you may go to any big bank, such as HSBC or Commercial International Bank, for currency swaps or to redeem traveler’s cheques. In Cairo, there are also a handful of Citibank branches.

Be warned that many sellers will attempt to defraud you as much as they can. Papyrus museums are a particularly prevalent ruse. They vary in a variety of flavors, but they are often referred to as galleries, museums, or workshops. You will be given a short explanation or demonstration on how papyrus is created, and you will be advised against purchasing papyrus from cheaper stores that use banana leaf (though no matter where you go, no one has a sample to show you, questioning the legitimacy of this “warning”). Prices will be in the hundreds of dollars, and you will be given what looks to be a substantial discount. However, if you look around, you will see that the majority of what they provide is only worth EGP1-5 at best. Tour guides, taxi drivers, and hotel personnel are all in on it, and they often get a 50% fee if they lead an unsuspecting visitor into this trap.

In Islamic Cairo, the Khan El-Khalili market is a massive souq. The merchants in this town are hungry and skillful, so don’t fall for the hard sell and be prepared to haggle. This is an excellent location for purchasing rustic glassware and perfume bottles. Take your time.

Zamalek offers a lot of tiny yet upscale businesses, as well as shops providing crafts, jewelry, and other products. Fair Trade Cairo, located in Zamalek, is a fantastic boutique that sells high-quality goods manufactured by local craftsmen. Nefertari, which is situated in Zamalek, sells amazing organic cotton linens, skin care products, and other such items. Nomad also has a modest, beautiful second floor storefront in Zamalek, as do Nagada and Khan Misr Taloun.

Midan Talaat Harb and its adjoining streets, especially Talaat Harb Street, are teeming with stores offering everything from shoes to books to sweets.

The Midan Ataba district of Downtown Cairo is home to big bookstore markets, where you can get affordable books, as well as electronics and apparel shops; however, be wary of the overcrowding, since it makes pickpocketing easier.

If you want to move around Cairo on your own, you'll find that having numerous maps handy is a good idea. Street and place names are spelled differently from map to map and from map to real location, and not every street will show on every map. BY METRO The first...

Greater Cairo is a massive metropolis with a population of over 17 million people, making it Africa's and the Middle East's biggest metropolitan region. Tahrir Square is the focal point. MIDAN TAHRIR Midan El Tahrir is the heart of the contemporary city, with large hotels, transportation hubs, and the Egyptian Museum,...

Egyptian Museum  Located in the Midan Tahrir neighborhood, it is formally known as the Museum of Egyptian Antiquities but is more often referred to as the Egyptian Museum. It has the world's finest collection of ancient Egyptian antiquities. (250 m north of Tahrir square),  +20 2 25796948.  Museu do Cairo The Egyptian Museum in...

Cairo International Film Festival Egypt's appreciation of the arts in general may be traced back to the Pharaohs' rich legacy. Egypt has had a rich cinematic legacy since the early twentieth century, when the art of filming was initially pioneered. Cinema quickly blossomed into a massive motion picture business as...

Stay safe Civil unrest has been a chronic concern in Cairo since 2011, when a revolution deposed President Hosni Mubarak. President Mohamed Morsi was deposed in July 2013, sparking deadly street protests and riots. Protests in Tahrir Square and others, although typically nonviolent in nature, may quickly turn violent, posing...