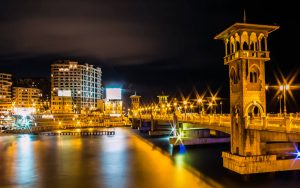 EgyptAlexandriaHow To Get Around In Alexandria

You can travel pretty much everywhere in Alexandria by taking the local transport accessible along the Corniche.

The city’s yellow and black cabs are a convenient and inexpensive method to get around Alexandria. However, taxis will almost always refuse to utilize meters (the prices haven’t changed in years), and drivers love to take advantage of non-Alexandrians, so it’s advisable to settle on a fee before getting in. No taxi journey shall cost more than 25LE between any two places in the city. Alternatively, if you are visiting Alexandria for the day, get a cab outside the train station for LE 10-15 per person. Pay roughly LE 50-60 to the driver if you aim to tour 5 locations in 3–4 hours, or LE 80-100 if you plan to see 8-10 destinations in 5–6 hours.

To hail a cab, wave at the driver and announce your destination’s name. If the motorist accepts, they will park as quickly as possible on the side of the road. Some taxis will stop even if they already have a customer to pick you up, but such offers should be declined. Furthermore, always check back after you exit the cab; there is no phone number to contact if you lose anything valuable, and there are almost no possibilities of it being recovered.

Fast Call cabs may be hired by phone at 19559 or 0800-999-9999 (toll free). These are more expensive, but they are often superior than standard black and bright yellow taxis.

Alexandria boasts a rickety, sluggish, but inexpensive tram system that dates from 1860 and looks the part – it’s Africa’s oldest tram system still in operation. The route map is befuddling and constantly changing, but one thing remains constant: the network is divided into the interurban Ramleh Lines (Tram el-Raml), which use blue-and-cream trams and run across the city a few blocks back from the sea towards the eastern suburbs, and the City Lines (Tram el-Madina), which use bright yellow trams and run west and south of central Alex. They meet at Raml Station (Mahattat el-Raml), which is located in the centre of Alex. The Ramleh Lines, despite their antiquity, are comparatively speedy due to long segments of dedicated and unbroken right-of-way; the City Lines, on the other hand, are regularly stalled in traffic. The flat fee for both lines is 50 piasters (US$0.06), and tickets may be purchased on board. The first (of three) cars on the blue trams are dedicated for women exclusively.

The yellow tram #25, which operates from Raml Station to Ras el-Tin and Fort Qait Bey, is perhaps the most beneficial service for visitors. You may also reach to Raml by taking any blue tram west from Sidr Gabr bus/railway station, although not all trams eastward stop there.

Local bus services have improved greatly in recent years, although they are still a little complicated for individuals who haven’t lived in Alexandria for a long time. Aside from city buses, there are also “mini-buses” that operate on a hop-and-go basis. They are readily identifiable 14-person buses that will stop when you wave and will stop where you need to exit. Because drivers seldom understand English, make sure you know your destination’s Arabic name or that you already know where you’ll be stopping. The routes are mainly along major thoroughfares, with cars adhering to well-established routes. The itineraries are posted in Arabic on the sides of the truck, but even if you know Arabic, you may not be able to understand them since the drivers sometimes change routes without modifying their signs. If you stay in Alexandria for a while, you could pick up on the natives’ fairly complicated system of hand signals for indicating the intended location. The cost of a travel is usually between LE 0.50 and LE 1.50.

BY PLAIN El Nouzha Airport, Alexandria's primary airport, offers a limited number of domestic flights and reasonably wide service to destinations around the Middle East. However, the sole link to Europe is via Athens. The airport is located 8 kilometers (5 miles) south of the city. A cab ride should...

Historical monuments Citadel of Qaitbay, Ras el-Tin (yellow tram #25),  +20 3-4809144. 9AM-4PM. The stronghold, which overlooks the Mediterranean Sea and the city itself, is one of the city's emblems and is situated in a lovely position. Built in 1477 AD by Mameluke Sultan Abdul-Nasser Qa'it Bay, it has been demolished and rebuilt thrice since...

Alexandria is well-known for having some of the country's greatest seafood restaurants. Budget If you want to dine affordably in Alexandria, seek out establishments frequented by locals. Bear in mind that, due to Egypt's low health inspections, you should exercise caution at the majority of these restaurants if your immune...

Bars Visitors to today's Alexandria sometimes grumble that it's difficult to locate a nice drinking establishment, despite the fact that the city had a labyrinth of pubs and nightclubs 50 years ago. Spitfire Bar, Sa'ad Zaghloul St. Despite its prominent placement on the corner of a square on this bustling street, it's easy...

Numerous Alexandria festivities are religious in nature. They have a number of festivals and festivities that demonstrate their fervent faith in the deity they serve. Apart from religious festivals, they also have secular festivities like as public holidays and other occasions to showcase their vibrant culture and customs. You Belong,...