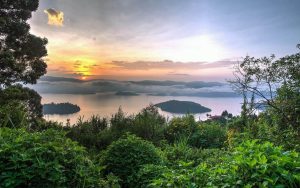 Katanga
mostly fertile plateaus for agriculture & ranching, home to much of the country’s recoverable minerals; de facto independent from 1960-1966 during the “Katanga Crisis”

Kasai
significant diamond mining, not much else.

Kivu (Bukavu, Goma, Kahuzi-Biega National Park,Virunga National Park,)
This area, which is affected by Burundi, Rwanda, and Uganda, is renowned for its volcanoes, mountain gorillas, and unfortunately, incomprehensible wars.

Other destinations in DR Congo

UNESCO has designated many parks as World Heritage Sites.