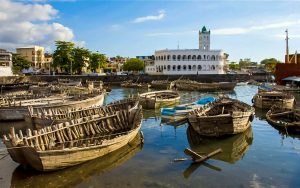 The Medina, the old town center, is a tangle of small lanes and ancient Swahili structures, although it is in bad condition. The historic city center is modeled after Stone Town in Zanzibar, however it is much smaller. There are several mosques in the Medina, including the Badjanani Mosque pr Ancienne Mosquée de Vendredi (old Friday mosque), which is the Medina’s oldest mosque. It was originally constructed in 1427, with a minaret added in 1921. National and international concerts, celebrations, conferences, film screenings, and seminars are held in the Alliance Franco-300-seat Comorienne’s theatre. The 700-seat Al-Kamar, the 500-seat Palais du Peuple, and the 300-seat Foyer des Jeunes de Foumbouni are among the other venues.

Moroni boasts many commercial malls, hotels, and a nightclub. When the adjacent Karthala volcano is dormant, it is also a popular trekking destination. Apart from the mosque, the Historical and Literary Museum is another attraction in the port area. A fishing community on the fringes of the city is highly renowned for the Coelacanth fish species.