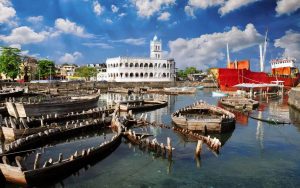 AfricaComorosHow To Travel Around Comoros

Cars may be rented for around €30 (about KMF15,000) per day on Grand Comore. It is also feasible to use cabs (the usual cost from the airport to Moroni is about €15) or hitchhike. If you hitchhike, particularly as a Caucasian tourist, you may be asked to pay a charge. Because the residents do not have access to public transportation and children must walk to and from school, visitors with a vehicle may want to consider assisting hitchhikers. The price of a bottle of petrol is less than €10.

There are no public buses on Grand Comore. The most popular form of public transportation is shared cabs.

There is a boat that runs from Chindini on Grand Comore’s southern shore to Hoani on Moheli’s northern coast. These are tiny fiberglass fishing boats with varying degrees of boat and motor condition. They should only be used on calm days, since people have been forced to dump their luggage into the water, and there have been reports of boats being lost. On calm days, though, these boats are usually safe to use. As of March 2008, the price is KMF8,500, although starting bids for foreigners will be KMF15,000. There is an extra KMF500 departure tax levied by the council.

Large ferries (two or three per week) from Moroni to Foumboni on Moheli are more convenient. Prices are set at KMF8,000 and are somewhat adjustable.

There are also two big catamaran boats that run many times a week between Moroni on the west coast of Grand Comore and Mutsamudu on Anjouan.

Visitors are warned not to consume any of the native cuisine until it has been thoroughly prepared. The jackfruit, a big, green fruit (approximately 50 cm in length) with a lychee-like flavor, is one of the island's specialties. Alcohol may be purchased in Moroni from Indian and Chinese vendors near...

Handicrafts are often of poor quality, but Mayotte women and a few women in Grand Comore produce high-quality baskets. CDs, colorful women's clothing (KMF500 for a numbawani and KMF750 for a nicer shawl), gorgeous scarves (KMF2,000), and other imports are available. The majority of the handicrafts and tourist trinkets for...

French and Arabic are the official languages. The majority of Comorians speak Shikomor (Comorian), a collection of Swahili dialects, as their first language and French as a second. Some people are also fluent in Arabic. Each island has its own language. The greetings below are not always literal translations. Greetings almost...

Kinship and social structure A bilateral descent system exists in Comorian culture. Inheritance of immovable assets (land, houses) is matrilineal, handed down via the maternal line, comparable to many Bantu peoples, whereas other goods and patronymics are passed down through the male line. There are variations across the islands, with...

Precolonial peoples The Comoro Islands' earliest human occupants are believed to have been Arab, African, and Austronesian immigrants who arrived by boat. These people came no later than the sixth century AD, according to the oldest documented archaeological site, which was discovered on Nzwani, but habitation may have begun as...

Stay Safe in Comoros During the rainy season, cyclones are a possibility (December to April). On Grand Comore, there is an active volcano known as Le Kartala. Civil war is a possibility, with Anjouan Island being the most vulnerable (clashes between rebel and African Union forces). Stay Healthy in Comoros Malaria is common in...