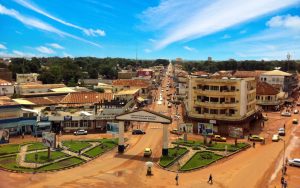 The colonial town design of Bangui has been preserved, with broad boulevards leading to the central market place. Boganda Museum, Bangui Zoo, and the Presidential Palace, previously the Bokassa Palace, are among Bangui’s attractions. The Roman Catholic Archdiocese of Bangui is headquartered at Notre-Dame Cathedral. Traditional musical instruments, weaponry, rural architectural characteristics, historical hunting equipment, ceramics, and religious relics are on exhibit in the Boganda Museum (Musée de Boganda). It features a collection of bark cloth, the material that Bokassa’s bed was covered with.

A number of hotels meet international standards. On the outskirts, the Ledger Plaza Bangui bills itself as a five-star hotel with an outdoor pool and tennis court. The National Hotel, which has 30 rooms, first opened its doors in 1970. The Golf Palace Hotel, the Hotel du Centre with 72 rooms, JM Residence, the Oubangui Hotel, which opened in 1985, and Hotel Somba with 23 rooms are all worth mentioning.

The airport servicing Bangui is Bangui M'Poko International Airport (BGF). It's around 7 kilometers (4 miles) northwest of Bangui. The airport handled 53,862 passengers in 2004. Douala, Tripoli, Paris (once a week), Brazzaville, Yaoundé, Cotonou, and N'Djamena are all served. All European (and possibly most other) travelers need a visa,...

The city boasts a large French expat population, which has resulted in one of Africa's greatest ice cream parlors, a supermarket that offers foreign (mostly French) delicacies like as foie gras, and a fantastic Italian restaurant. The cuisine of the Central African Republic is known as Centrafrican, and the Bangui...