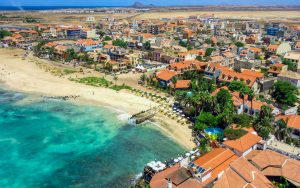 Fresh fish is abundant in Cape Verde. Tuna is widely available, as is Wahoo, a white-fleshed fish with a similar texture.

All of the islands provide European cuisine. Sal’s favorite cuisine is Italian. Vegetarians may choose salads or omelets.

The local beverage is an ice cold lager called STRELA, but you may also get foreign beers and other drinks, including some from Portugal.

By plane The islands of Sal, Santiago, Boa Vista, and So Vicente all have international airports. Europe, Africa, and the Americas are all connected. Because not all connections are accessible on travel booking platforms, it is generally a good idea to verify with a travel agency. From Europe Regular flights are available from...

Currency The escudo, abbreviated CVE, is the official currency of Cape Verde. It is denoted by a cifro (a symbol similar to the dollar sign, but with two vertical strokes instead of one) following the quantity. The currency is pegged to the euro at 110 dollars per euro. Euros are often...