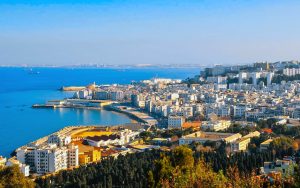 AlgeriaAlgiersHow To Travel To Algiers

The flag carrier Air Algerie has its headquarters at the airport.

Because Hall 2 is allocated for foreign carriers, Air Algerie operates from Hall 1.

The Algiers Central Train Station is close to the city center. Regular services are provided to important Algerian cities such as Oran, Annaba, and Constantine. SNTF (the national Algerian railway operator) has made significant advances in recent years, purchasing new air-conditioned carriages and launching new routes.

The principal bus terminal in Algiers, La Gare Routiere, is located in the commune of Hussein Dey (approximately a 7-10 minute drive from downtown) and provides a variety of bus services to most major Algerian cities and villages. It is a very inexpensive and effective method to travel between two Algerian cities. The majority of the coaches are contemporary and air-conditioned, so the travels are usually pleasant. However, there are a few ancient coaches still in operation, which you should avoid since the journey will be less enjoyable.

Due to the extended duration of vast distances such as Algiers-Tammanrasset or Algiers-Annaba, flying is preferred.

Because Algiers is the country’s capital, most, if not all, significant highways in Algeria begin and conclude there. So getting to Algiers is simple. However, the infrastructure of Algerian roads is not well-regarded, so traveling by car may not be the best choice. A number of road projects are underway around the nation to improve infrastructure, most notably the East-West motorway, which runs from Annaba in the east to Oran in the west, passing through Algiers.

Be wary of traffic bottlenecks, particularly in downtown Algiers. There aren’t many traffic signals. Police officers have taken the place of the lights. Almost every municipality has a police or military checkpoint. Slowing down is strongly advised. The use of cell phones while driving is severely forbidden. Make sure you’re wearing your seat belts.

By MetroThe first stretch of the Algiers Metro eventually opened on November 1, 2011, after more than three decades of development (or lack thereof). Line 1 runs from Tafourah Grande Poste in the city center, just south of Gare d'Alger, the major train station, to Ha El Badr, stopping at...