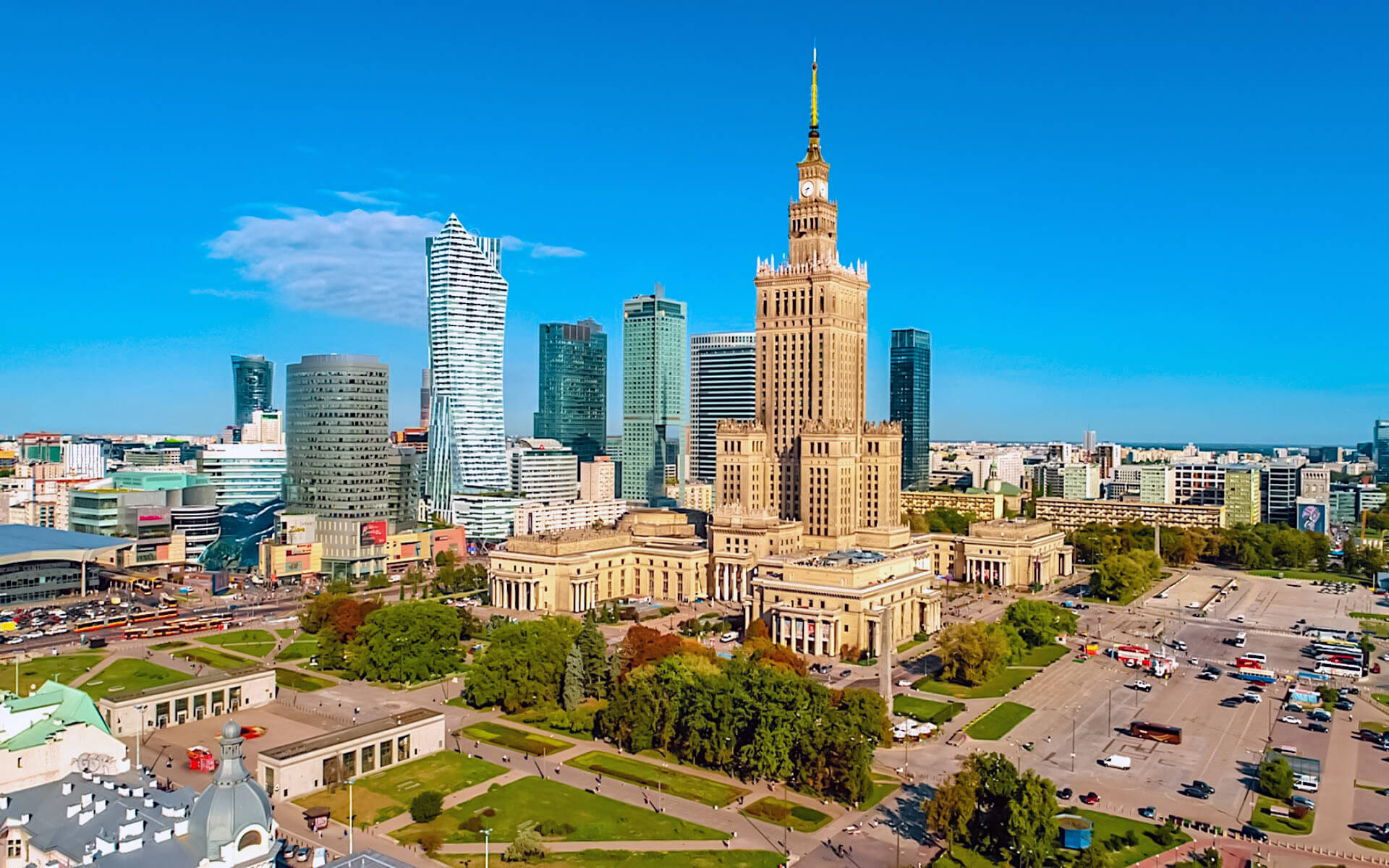 Warsaw is Poland’s capital and biggest city. It is located in east-central Poland on the Vistula River, about 260 kilometers (160 miles) from the Baltic Sea and 300 kilometers (190 miles) from the Carpathian Mountains. Its population is projected to be 1.740 million people, with a larger metropolitan area of 2.666 million people, making Warsaw the ninth most populated capital city in the European Union.

Today, Warsaw is regarded as a “Alpha–” global metropolis, a major international tourist attraction, and an important cultural, political, and economic center.

The oldest historical mention to Warsaw goes back to 1313, when Kraków was the Polish capital city.

The city is the seat of a Roman Catholic archdiocese (on the Vistula’s left bank) and diocese (on the Vistula’s right bank), as well as several universities, including the Polish Academy of Sciences and the University of Warsaw, as well as two opera houses, theaters, museums, libraries, and monuments. Warsaw’s historic city center, with its attractive Old Town, was designated a UNESCO World Heritage Site in 1980.

Today, Warsaw is a thriving city and one of the European Union’s fastest-growing capitals, as well as the Union’s ninth most populated metropolitan center. Its unique architectural combination features a mix of modern and ancient and is continually evolving.

While it is rather vast, it is quite simple to traverse for visitors due to an excellent public transportation system, and the most notable landmarks are relatively near to one other. There is no lack of lodging alternatives, as well as a diverse selection of restaurants and pubs.

Warsaw’s nightlife is also on the rise, and a revitalized café culture has taken hold of the city. There is a wide range of museums, galleries, and other tourist attractions, and there is always something going on all year.

The Castle Square with the Royal Castle and the famed King Sigismund’s Column, St. John’s Cathedral, Market Square, palaces, churches, and mansions all exhibit a wealth of color and architectural detail. Buildings reflect practically every architectural style and historical era in Europe. Warsaw has several examples of medieval, Renaissance, Baroque, and Neoclassical architecture, and a fifth of the city is covered with luxury parks and royal gardens.

Summers in Warsaw may range from pleasant to oppressively hot. There is no air conditioning in most households and some hotels, thus the days and nights may be unbearably hot, disrupting one’s sleep. Travelers should pack light summer clothing during the day, but carry an additional jacket for the nights, which may turn a bit cool.

Winters, on the other hand, are quite chilly. Weather may often bring the city to a halt. When it snows, it may take up to an hour only to drive a few city blocks, with traffic snarled and road maintenance caught off guard (despite warnings from meteorologists in several days in advance). Buses and trams will be operating late, causing complete mayhem on public transit. On the first day of snow in 2010, it took up to three hours to get from Warsaw’s Wola neighborhood to the northern point of Warsaw’s Mokotów district, a journey that should have taken no more than 30–45 minutes. When visiting Poland from late autumn to early spring, visitors should carry sturdy, water-resistant shoes.

The Vistula River runs through the city. It is situated in the Masovian Plain’s core, with an average height of 100 meters (330 feet) above sea level. The highest point on the left side of the city is 115.7 meters (379.6 feet) high (“Redutowa” bus depot, district of Wola), while the highest point on the right side is 122.1 meters (400.6 feet) high (“Groszówka” estate, district of Wesoa, opposite the eastern boundary). The lowest point is located at a height of 75.6 metres (248.0 feet) (at the right bank of the Vistula, by the eastern border of Warsaw).

Warsaw was named the world’s 46th most expensive city to live in in 2011. The Globalization and Global Cities (GaWC) Study Group and Network at Loughborough University classed it as an Alpha- world city (also known as a “major world city”), putting it on par with cities such as Washington, San Francisco, Seoul, and New Delhi. In addition, the city was placed eighth out of 65 cities in MasterCard’s Emerging Markets Index (2008).

Most of the Old Town has free wi-fi, as do various cafés and restaurants, including McDonald’s, KFC, Subway, Starbucks, Coffee Heaven, and W Biegu.

Warsaw’s area code is 22, and it must be dialed even while making local calls. When dialing an international call to Warsaw, start with the country code, +48, and then the remainder of the number. There is no need to include a “0” at the beginning of the phone number. When phoning from a mobile phone, any number must be dialed as if it were an international number.

Pay phones are quite scarce, thus it is advisable to depend on alternative modes of communication. Pay phones may only be used with calling cards purchased at post offices.

Pre-paid SIM cards with Polish phone numbers start at 5 z and are available from almost every major carrier. They are available at many kiosks.

Legender om at bygge "THE GREAT WALL OF CHINA"